General facts about Microworkers and Crowdtask

Crowdtask is a US-based platform which connects the „worker“ (people who carry out micro tasks) and the „employer“ (people who put the micro tasks on the platform). It seems there is another parallel platform called www.microworkers.com which has the same headquarter/company name (Weblabcenter Inc.) and the same web content as crowdtask.com. The person behind the platform is Nhatvi Nguyen who founded microworkers.com in 2010. In connection with this person the platform http://microtoilers.com/ was found. It is also a microjob platform but was closed in June 2015.

As the registration on crowdtasks.com is currently closed the evaluation was continued for the platform www.microworkers.com. This platform went into the Beta test phase in the middle of 2013 after it was redesigned completely. 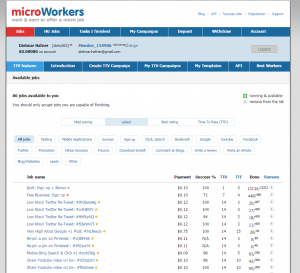 Exact user numbers could not be found. As crowdtasks.com has only few information, we looked further into microworkers.com. Here the Facebook fans are ~ 29K and the Twitter follower are ~ 2K. On the startpage it says there are 700.000 MicroWorkers worldwide. The number of active Workers is not ascertainable.

The platform Microworkers has a modern startpage. The rest of the websites behind it are not designed modern. Still, the platform is designed responsively.

The platform crowdtask.com seems quite modern. Unfortunately, the test could not be continued as the registration on the platform has been deactivated.

The platform Microworkers is constantly developed further. In the Microworker blog there are regular articles on new features and updates. There seems to be no email newsletter as I did not receive one.

The payment of the tasks is always under 1 USD. The highest payment is for forum posts. Generally, the payment is quite poor. Tasks are mostly posting in Social Media by influencers (high Klout Score, high number of Twitter follower/Facebook friends) or simple user registration.

After further investigation in Microworkers some negative feedback was found, some spoke of SCAM. Very often the Workers did not get the necessary PIN for the paying out.

Have you already tried Crowdtask and/or Microworkers? Let us know about your experience in the comments.