Founded in 2005 in Germany, the proof of concept was completed successfully in 2006. In 2008 Clickworker expanded its attempts to subdivide major contracts into micro tasks. These micro tasks where to be provided to Clickworker via the crowdsourcing platform and paid (http://www.clickworker.com/wp-content/uploads/2015/03/Onepager_clickworker_EN2015.pdf).

During the start-up period in 2010 the company was supported with the investment sum of 3.5 million Euros from Klaus Wecken, High-Tech Gründerfond, KfW Bank, and SeedCapital Dortmund.

Clickworker places tasks to purchasers/contractors in the following sectors: 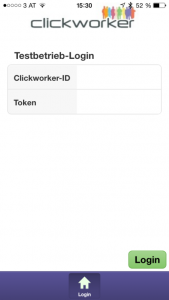 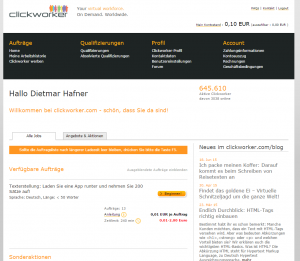 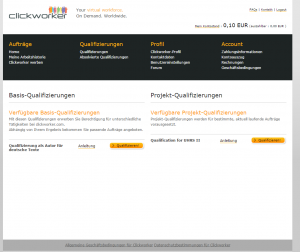 The platform started in 2009 with about 800 Clickworkers. In 2010 it had already grown to 50K. The platform speaks of 700K Clickworkers worldwide. Upon login the number of about 644K registered Clickworkers is given and mostly just under 3000 are online at any given time.

On the website it says that there are Clickworkers in 136 countries (30 languages). This seems exaggerated as the majority of Clickworkers is probably from Europe.

The service has grown rapidly in the last years according to the number of users. Yet the present growth seems to be restrained as there are about 700K users but only about 5k are active on the platform. Currently, the company advertises two fulltime and one part-time position.

The fact that the qualification test only works on Internet Explorer and that it is very slow is very negative. Additionally, the tasks for the qualification are to be completed within 1:30 minutes. This leads to stress if there are investigation tasks.

At long last the payment is low to very low in contrast to the expenditure of time.

Have you already tried Clickworker? Let us know about your experience in the comments.