Amazon Mechanical Turk is a marketplace for tasks that need human intelligence. First, the platform was developed for Amazon internally then made accessible to the public in 2005.

With Mechanical Turk the so called HIT (Human Intelligence Task) where found. These are tasks that need human intelligence, e.g. identify objects in a video or picture, deleting duplicates, transcription of audio records or data investigation.

Besides the HIT there are also qualification tests which can act as preliminary stage of the tasks.

The purchaser (Requester) creates the micro job (HIT) on the requester platform. In the course of this the budget for the micro job is allocated. The so called request also determines a bonus which is distributed when the task was completed very satisfyingly.

Could not be tested as Amazon Mechanical Turk rejected my request for registration. 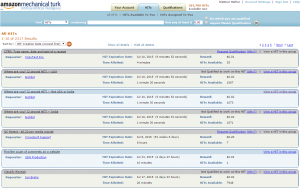 The number of users is about 500k in 190 countries (2011). On average approx. 360K HITs were offered. The spreading worldwide is enormous as the MTurk world map shows.

Amazon is, of course, the big player at crowd sourced jobs, still it has no mobile App or responsive website. Therefore the tasks have to be carried out bound on a PC. So e.g. locally based micro jobs or photo tasks are not offered.

Have you already tried Amazon Mechanical Turk? Let us know about your experience in the comments.